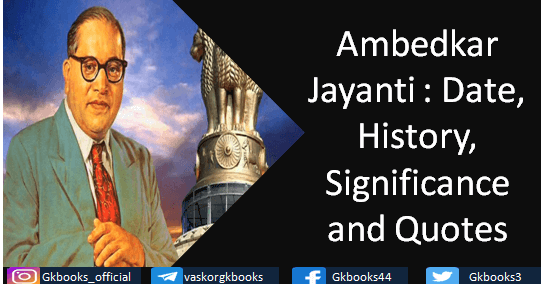 • The longest written constitution of the world was written by the constitutional assembly of India, whose chairman was Bhimrao Ramji Ambedkar.

• Ambedkar Jayanti is also celebrated to remember his commitment in fighting social evils like caste discrimination and oppression. He strongly opposed the caste system and sought to eradicate it from the society.

• He always worked to uplift the lives of women, labourers and the untouchables. Being a savant social reformer, economist and influential orator, Dr Ambedkar was a scholar in various disciplines like political science, law and economics.

• Ambedkar Jayanti or Bhim Jayanti observed on 14 April to commemorate the birth anniversary of B. R. Ambedkar.

• To pay tribute to his invaluable contribution to the Indian legal system and Constitution, every year, 14th of April is celebrated as Equality day.

• In 2022 the Ambedkar Jayanti will fall on Thursday.

• Janardan Sadashiv Ranapisay, an Ambedkarite and social activist, celebrated the first birth anniversary of Babasaheb Ambedkar on 14 April 1928 in Pune.

• The Ambedkar Jayanti draws attention to the caste-based bigotry that still exist in our society even when we celebrate the Azadi Ka Amrit Mahotsav to commemorate 75 years of independence.

• We commemorate Babasaheb’s contribution to the upliftment of the underprivileged by commemorating the day.

• Ambedkar drafted the Indian constitution that guarantees equal rights to all citizens, regardless of caste, creed, religion, race, or culture.

• In order to bring about a new socio-political awareness among the untouchables and placing their grievances before the government, Dr. Babasaheb Ambedkar established “Bahishkrit Hitkarini Sabaha” on 20 July 1924 at Bombay.

14 April 1990
• Ambedkar was accorded with the Bharat Ratna award.

Year 2017
• Government of Maharashtra has decided to celebrate 14 April as Knowledge Day (Dnyan Din) in the Indian state of Maharashtra in memory of Dr. Babasaheb Ambedkar.

Year 2015
• To mark the 125 Birth Anniversary in the honor of Ambedkar, Government of India Issued 10 Rupees and 125 Rupees coins.

Year 2022
• The Telangana government would install the proposed 125-ft bronze statue of Dr B R Ambedkar at PV Marg by December 2022 this year.

Some of the best Quotes of Babasaheb Ambedkar

Here are some evocative quotes by Dr Ambedkar that you can share this Ambedkar Jayanti.

• “The relationship between husband and wife should be one of closest friends.”

• “Political tyranny is nothing compared to the social tyranny and a reformer who defies society is a more courageous man than a politician who defies Government.”

•“A great man is different from an eminent one in that he is ready to be the servant of the society.”

• “We must stand on our own feet and fight as best as we can for our rights. So carry on your agitation and organize your forces. Power and prestige will come to you through struggle”

•“The history of India is nothing but a history of a mortal conflict between Buddhism and Brahminism”.

• “Men are mortal, So are ideas- An idea needs propagation as much as a plant needs watering. Otherwise both will wither and die.”

•“Cultivation of mind should be the ultimate aim of human existence”.

•“I like the religion that teaches liberty, equality and fraternity”

•“Life should be great rather than long”.

• “Be Educated, Be Organised and Be Agitated”

• “I measure the progress of a community by the degree of progress which women have achieved.”